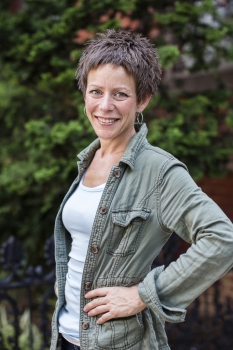 Photographer based in Washington, DC
Karine Aigner is an award winning visual journalist whose work focuses on stories at the intersections of animals and the humans they must live amongst. Raised in Saudi Arabia, Aigner has motorcycled through Vietnam, circumnavigated... read on

Karine Aigner is an award winning visual journalist whose work focuses on stories at the intersections of animals and the humans they must live amongst.

Raised in Saudi Arabia, Aigner has motorcycled through Vietnam, circumnavigated the globe by ship, taught English in Taiwan, traipsed through the jungles of the DRC, and battled seasickness in Liberian waters; and then there was the time the hyena pups chewed her shoes (while on her feet). From one chapter to the next, her adventures uncover her fervor to tell the stories of life through the lens of a camera; her passion is storytelling of the wild—of animals, and their relationships to humans, animals and their relationships to their own world, and their existence in the space between the two.

A multiple award-winning photographer, Aigner has a unique skill set as not only a maker of images and a storyteller, but as a magazine picture editor with over a decade of experience working with photographers—and nine years as the Senior picture editor for National Geographic Kids magazine. As a conservationist, Karine believes in the power of youth, and along with a colleague started Kids Conservation Photography Workshops (www.kidsconservationphotoworkshops.com) – an endeavor to take teenagers away from their comfort zones, put the camera in their hands, and connect them to their environment. Aigner believes the camera is one of the most powerful tools we have to teach awareness, understanding, and conservation.

Karine’s work has been featured in National Geographic Magazine, Audubon Magazine, BBC Wildlife, The Nature Conservancy, Ranger Rick and WWF magazines to name a few.  Karine is a member of The Photo Society, a fellow with the International League of Conservation Photographers (iLCP) and a member of Girls Who Click (a non-profit organization offering free photographic workshops to inspire teen girls that they too can have careers in the wildlife and science fields). Her imagery is represented by Nature Picture Library, as well as Tandem Stills & Motion.

In her ‘spare time,’ Aigner leads photographic tours across the globe. Karine technically lives in Washington, DC, but can often be found in Texas photographing her other love: bobcats.