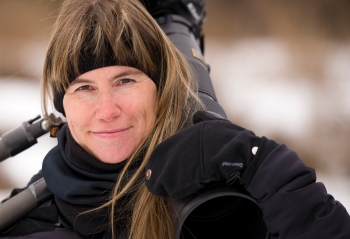 Photographer @ Self Employed based in Vancouver - Canada
Daisy Gilardini is a conservation photographer who specializes in the Polar Regions, with a particular emphasis on Antarctic wildlife and North American bears. She is from Switzerland originally, and is now based in Vancouver, Canada.... read on

Daisy Gilardini is a conservation photographer who specializes in the Polar Regions, with a particular emphasis on Antarctic wildlife and North American bears. She is from Switzerland originally, and is now based in Vancouver, Canada.

She fell in love with Antarctica during her first trip there in 1997. She has since devoted most of her time to photographing the Polar Regions. In 23 years of polar exploration, she has joined more than 90 expeditions to Antarctica and the Arctic. Among her accomplishments, she has skied the final degree to the North Pole.

She is a member of the International League of Conservation Photographers (ILCP) and the SeaLegacy Collective, a fellow of the New York-based Explorers Club, and member of the Royal Canadian Geographical Society.

She represents a number of prominent, industry-leading brands in the photography field. She is a Ambassador for the following companies Nikon (Switzerland), Gitzo, Lowepro, Eizo, SanDisk and WesternDigital.

Daisy's images have been published internationally in leading magazines such as National Geographic, BBC Wildlife, Canadian Geographic, Nature's Best and Outdoor Photography. Her images have also been used by high-profile NGOs such as Greenpeace and the World Wildlife Fund, among others.

Since 2018, she has been a photographer in residence with Canadian Geographic and she is has been nominated Greenpeace Antarctic Ambassador.

Her work has been recognized by some of the world's most prestigious photography awards, including BBC Wildlife Photographer of the Year, Travel Photography of the Year and the Nature's Best Windland Smith Rice International Awards.

Her childhood passion for the natural world has evolved into a lifelong commitment to spread the message of conservation and the need to preserve what's left of the world's remaining wild places.