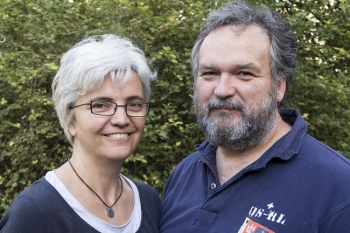 Member
Elyane and Cedric Jacquet, a Belgian husband & wife team of photographers, met at university. In 1993, they travelled for 6 months through Africa, from Zanzibar to Cape Town in their old Land Rover.  During that trip they... read on

Elyane and Cedric Jacquet, a Belgian husband & wife team of photographers, met at university. In 1993, they travelled for 6 months through Africa, from Zanzibar to Cape Town in their old Land Rover.

During that trip they developed a passion for photography and wildlife. After considering moving to Namibia to open an animal orphanage, they eventually returned to Europe. A few years later both became professional free-lance photographers.

Working as a team enables them to offer a comprehensive coverage of their destinations. Their favorite 'hunting grounds' are southern Africa (Namibia, Zimbabwe, Zambia, Mozambique, ) and Europe. In order to stay for longer periods of time in remote locations, they built a customized expedition truck, a fully autonomous mobile base to work from.

During their journeys, they met extraordinary people who dedicate themselves to the conservation of wildlife and its habitat. To help them and raise awareness to causes that are less known or publicized, they co-founded PPNat, Photographers for the Preservation of Nature. Thanks to privileged contacts with the major nature festivals, exhibitions of their images, videos and articles reach a wide European audience.

They spent a lot of time on issues like the threat on vultures, or the last remaining free-roaming elephants, but are best known for their work documenting and raising awareness to the plight of the pangolin, the most trafficked mammal on earth. They spent 2.5 years following the trail of the pangolin from African NGOs trying to save the animal from extinction to the Asian consumer market. Their short film The plight of the Pangolin, has recently been awarded at nature festivals in Europe.

Their images have won many international awards including the BBC Wildlife Photographer of the Year and the Concours international de la photo animalire du Festival of Montier-en-Der (France), and have been widely exhibited, in France, Belgium, Germany, Namibia and the UK. Authors of articles and books, they are regular speakers at nature festivals, at the Royal Academy of Arts of Antwerp, ... . They are currently working on a new book, on African conservation.