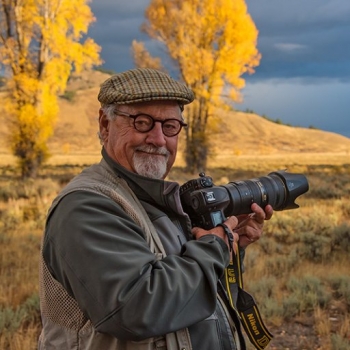 Member
Thomas D. Mangelsen, a Nebraska native, is recognized as one of the world's premier nature photographers. Mangelsen's love of nature, his life in the outdoors, and business success were heavily influenced by his father. An avid... read on

Thomas D. Mangelsen, a Nebraska native, is recognized as one of the world's premier nature photographers. Mangelsen's love of nature, his life in the outdoors, and business success were heavily influenced by his father. An avid sportsman, Harold Mangelsen took his sons to favorite blinds along the Platte River in Nebraska to hunt and observe the huge flocks of ducks, geese, and cranes that migrate through the area. From these outings Mangelsen learned the important lessons for photographing in the field, including patience, waiting for the right moment, and understanding animal behavior.

Mangelsen's photographs were showcased in Vital Signs: Images of Biodiversity. This natural history photography exhibit is a combination of Mangelsen's craft and knowledge of science, and stress the importance of maintaining a balanced and diverse ecosystem. Vital Signs was co-sponsored by Images of Nature? and the San Diego Natural History Museum and was exhibited in museums throughout the United States and Canada. Tom's work has also been exhibited in the National Museum of Wildlife Art in Jackson, Wyoming, Natural History Museum in London, and King Sportsman's Edge Gallery in New York City.

In 2005 Tom was named one of the 100 most important people in photography by American Photo Magazine as well as being honored with Nikon?s Legend behind the Lense recognition. He has received an Honorary Fellowship from The Royal Photographic Society in 2002, named North American Nature Photographer Association's (NANPA) Outstanding Nature Photographer of the Year in 2000 and in 1994, Mangelsen received the prestigious Wildlife Photographer of the Year Award, sponsored by the British Broadcasting Corporation (BBC) and British Gas.

Tom's dedication to preserve our fragile natural world is best stated in his own words; "May these images inspire you to experience and preserve the wonders of our natural world".

Tom sits in the Board of Directors ofThe Cougar Fund, an organization dedicated to protecting these great cats and their habitat.