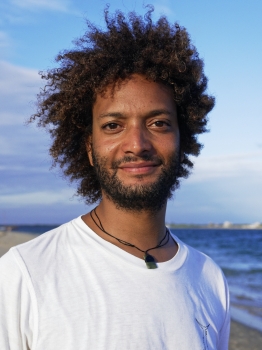 Member
Jahawi Bertolli is a National Geographic Explorer & Photo Camp Instructor, film maker, photographer and music producer from Kenya specialising in wildlife and the underwater world.  Growing up in Kenya he nurtured a deep... read on

Growing up in Kenya he nurtured a deep curiosity and love for the natural world and strives to portray the beauty, power and vulnerability of wild environments through his work. Although his work has taken him around the world his current focus is in on telling African wildlife and conservation stories in an innovative, fresh way by telling them through the eyes of the communities who have lived in these environments with these animals, making them culturally relevant and highlighting African storytelling.

In 2019 Jahawi was awarded a Vulcan Visiting World Filmaker Scholarship for the Jackson Wild Summit and was also the co-host of the annual Grand Teton Awards and in 2020 his short film 'Bahari Yetu' was selected as a Finalist for the Jackson Wild Media Awards in the Global Voices category and was on the Official Selection at the 2021 International Wildlife Film Festival. His previous films and photography have been displayed in the Smithsonian Museum of National History in Washington D.C and the UN Headquarters in New York. Jahawi is also a CBBC Planet Defender, presenting in a new hallmark series on CBBC made by the BBC Natural History Unit