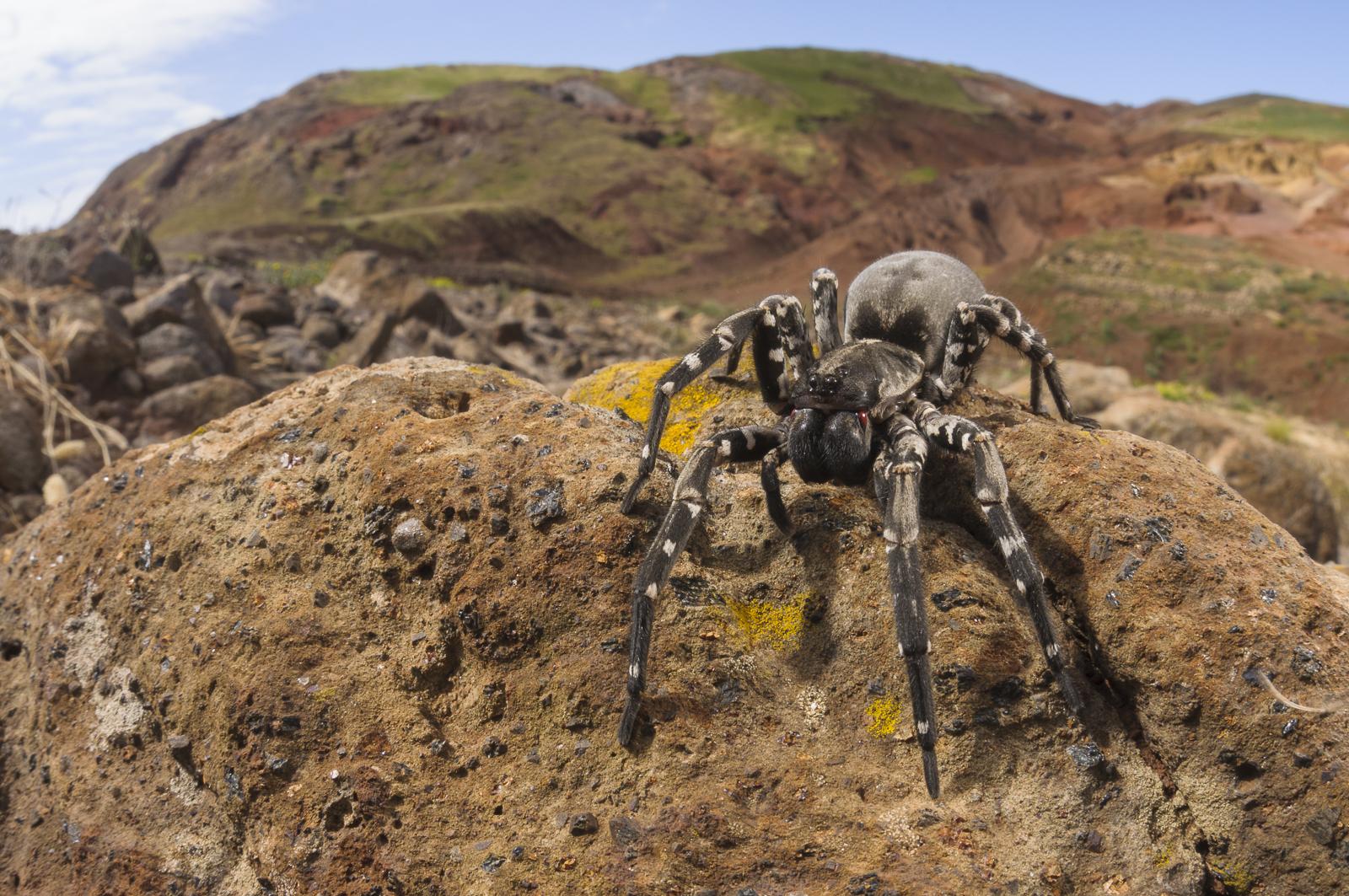 Deserta's wolf spider (Hogna ingens), Deserta Grande Island (Madeira, Portugal). It's the biggest wold spider in the world. This species is threatened by loss of habitat because it only lives in a single valley inside a small island and a alien herb is invading the ground and blocking the passage to the underside of stones. Listed as Critically Endangered by IUCN since 16 September 2015. 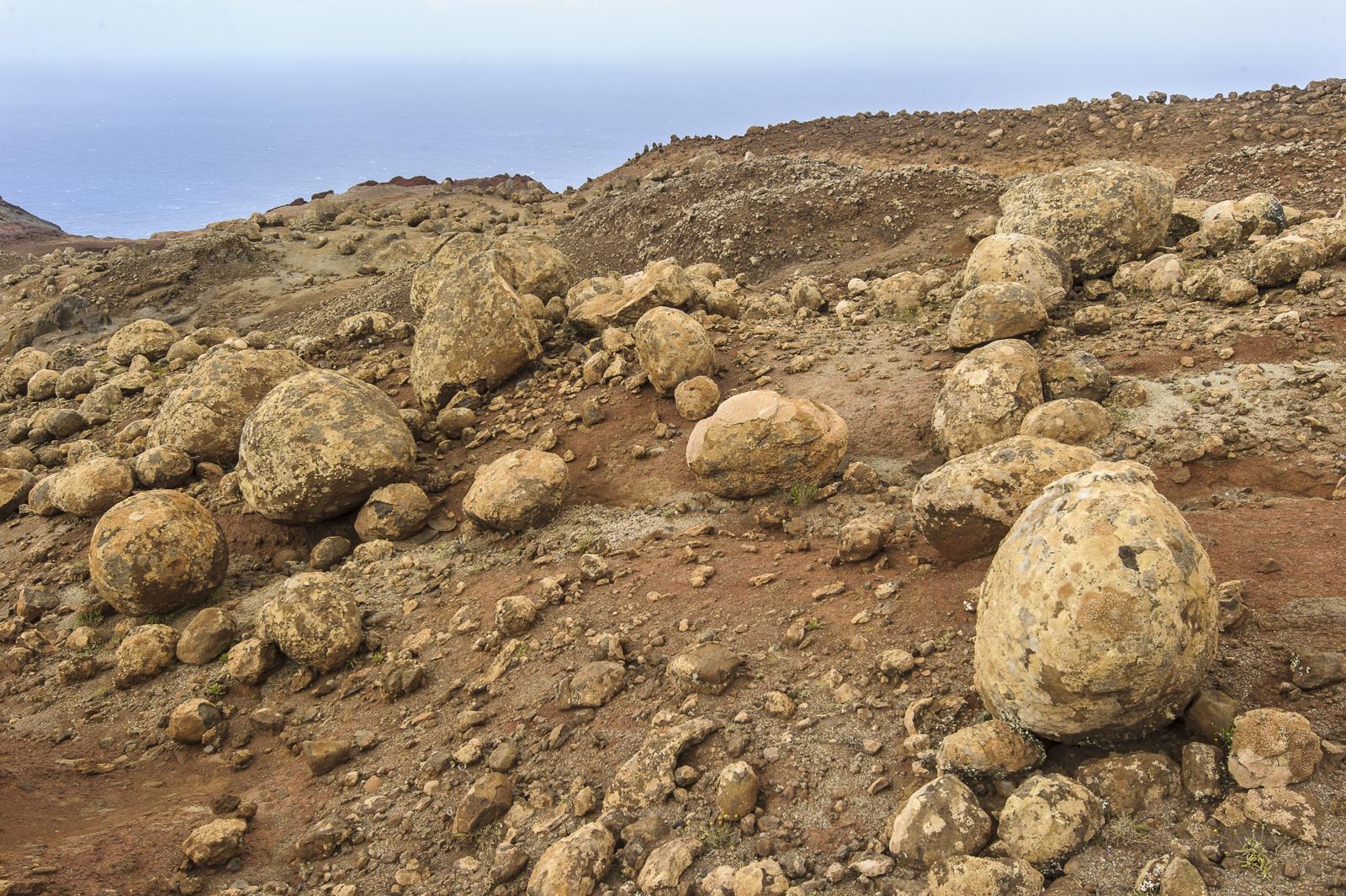 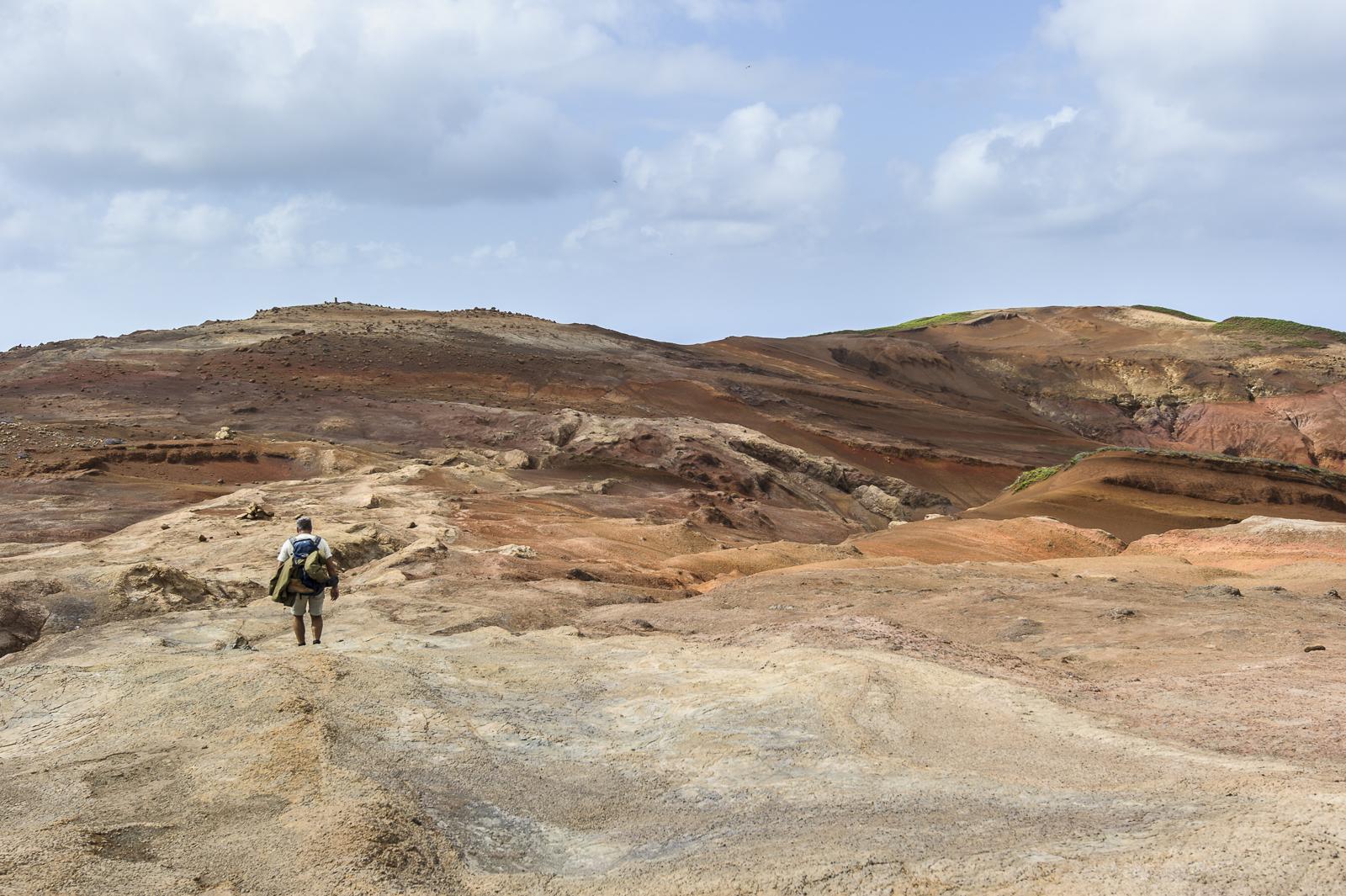 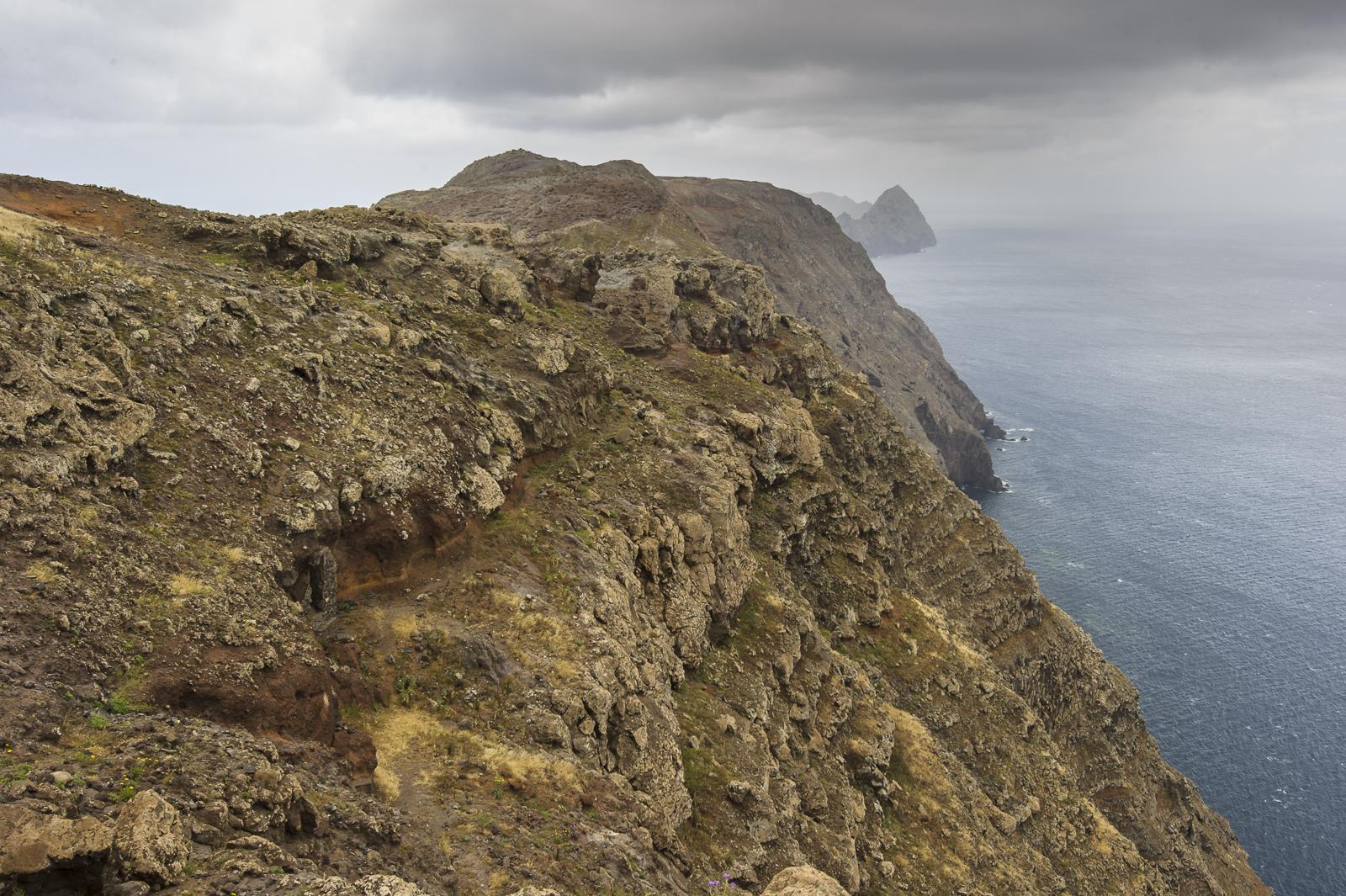 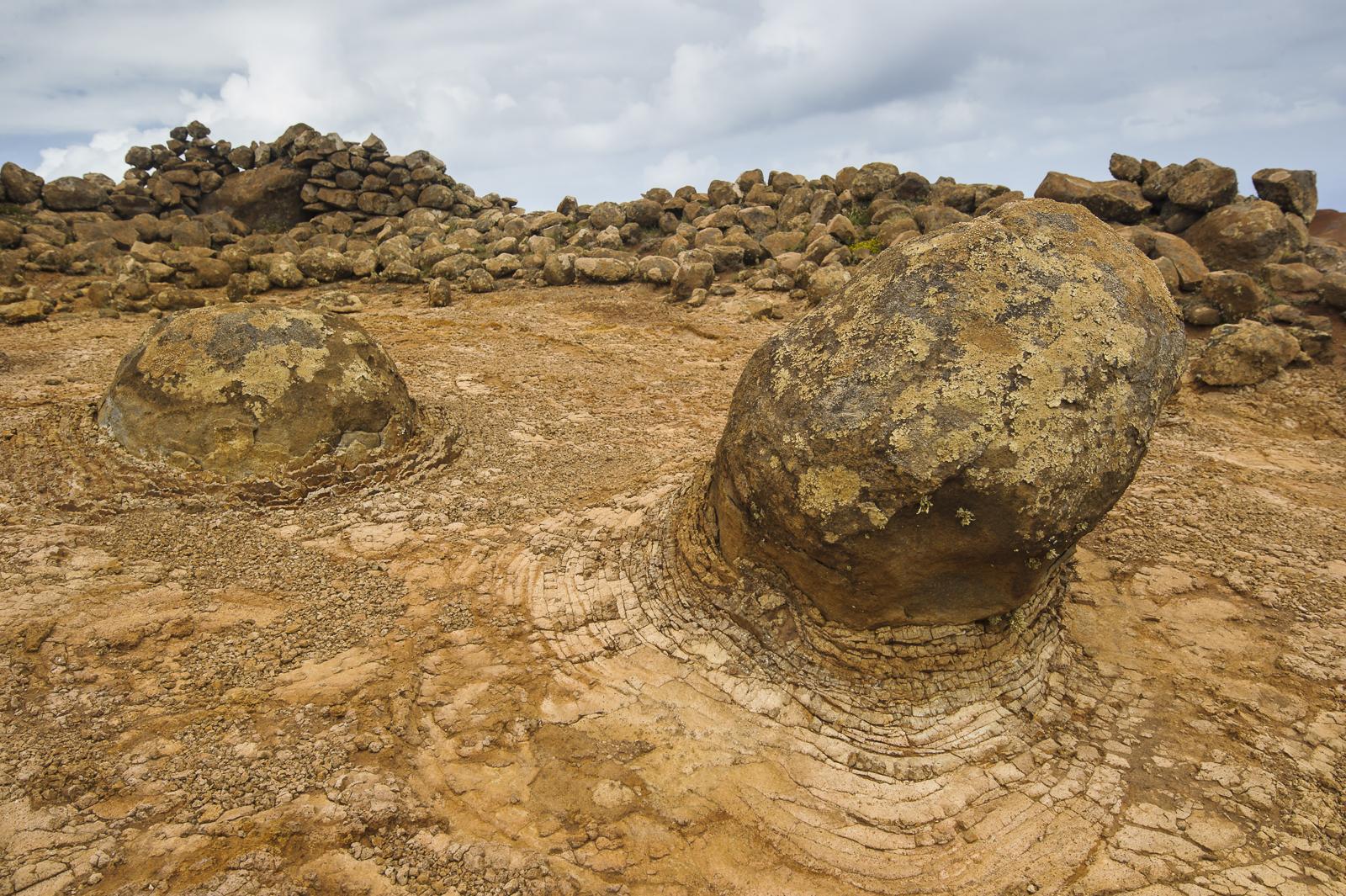 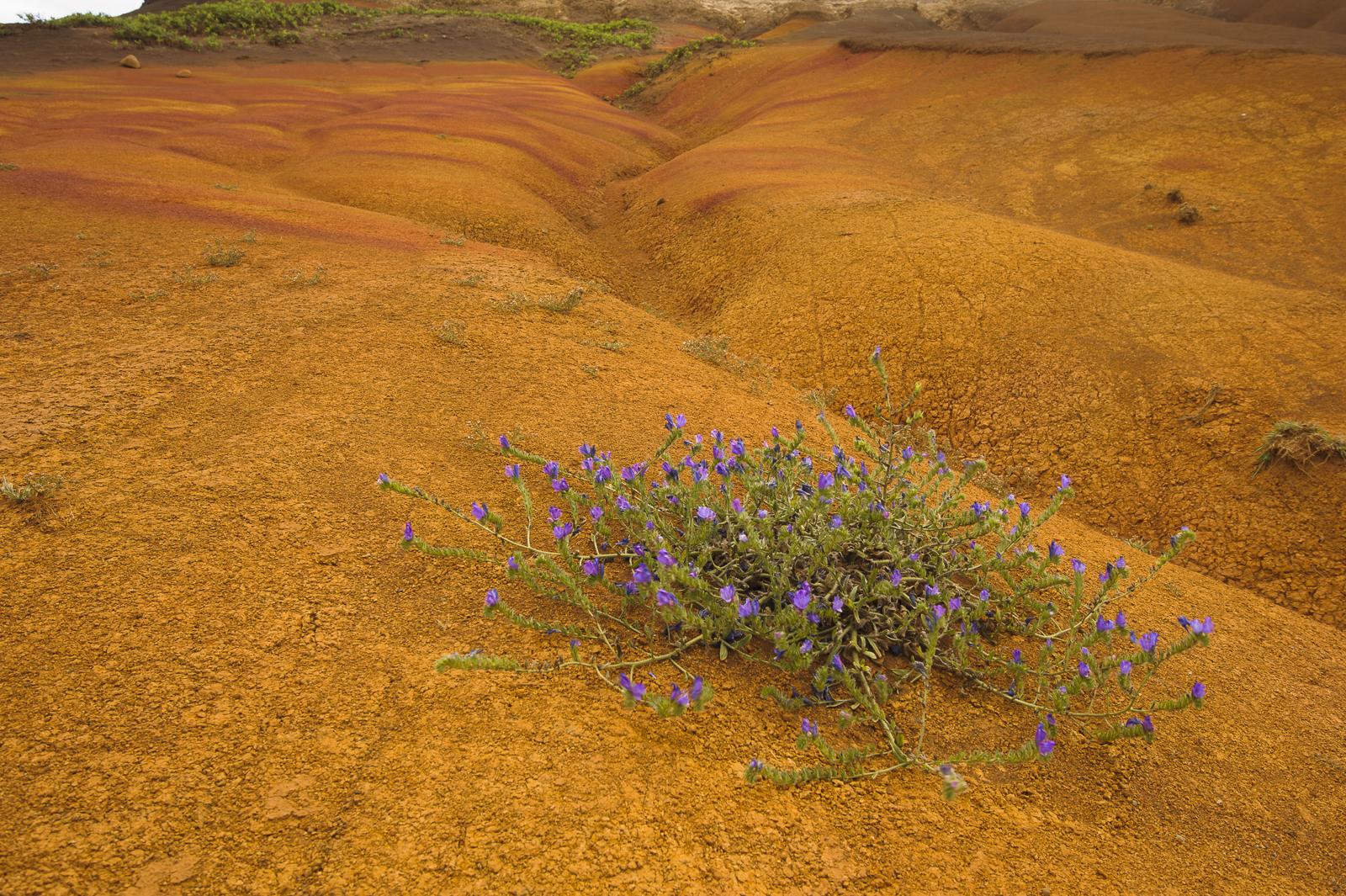 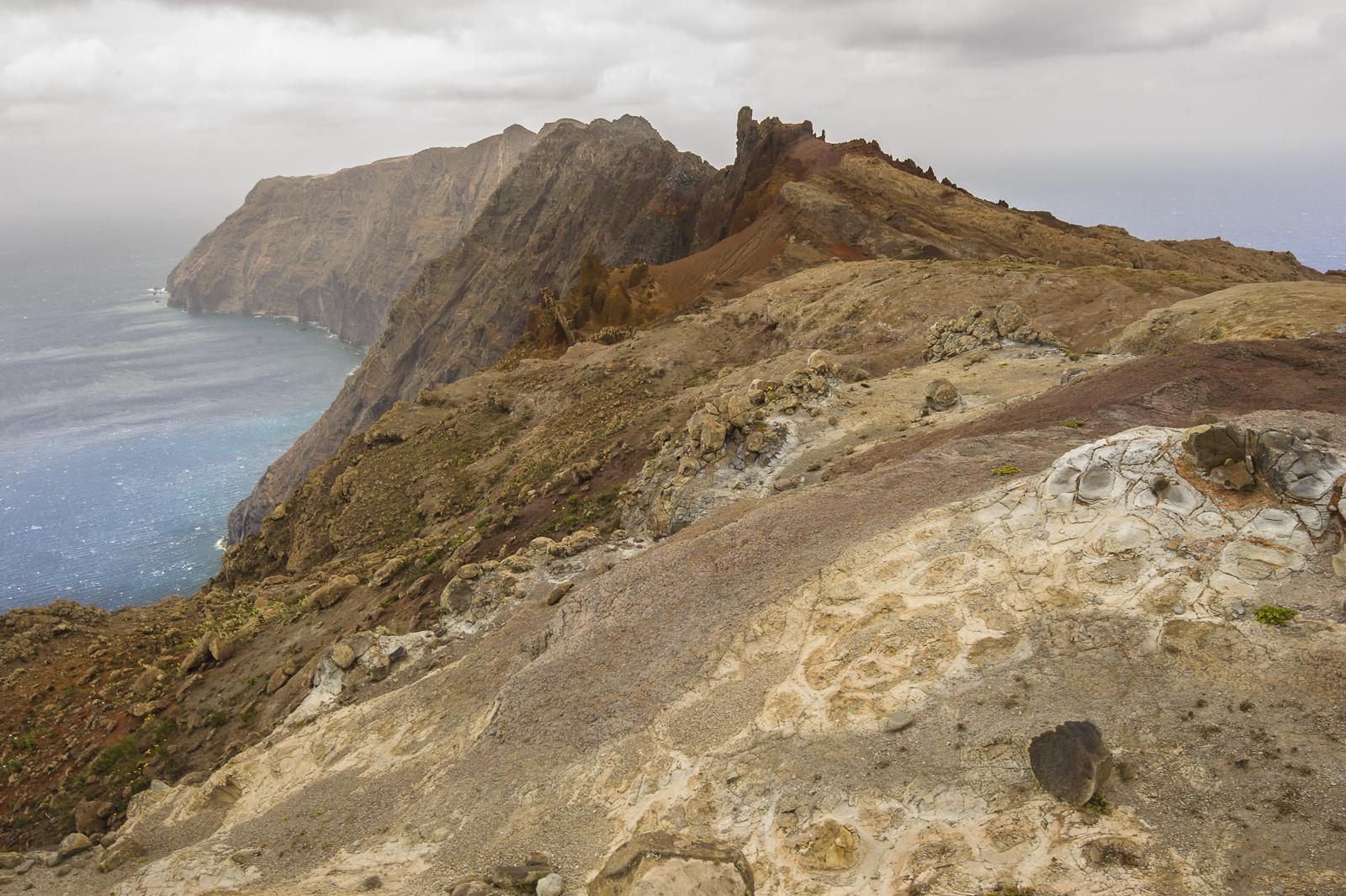 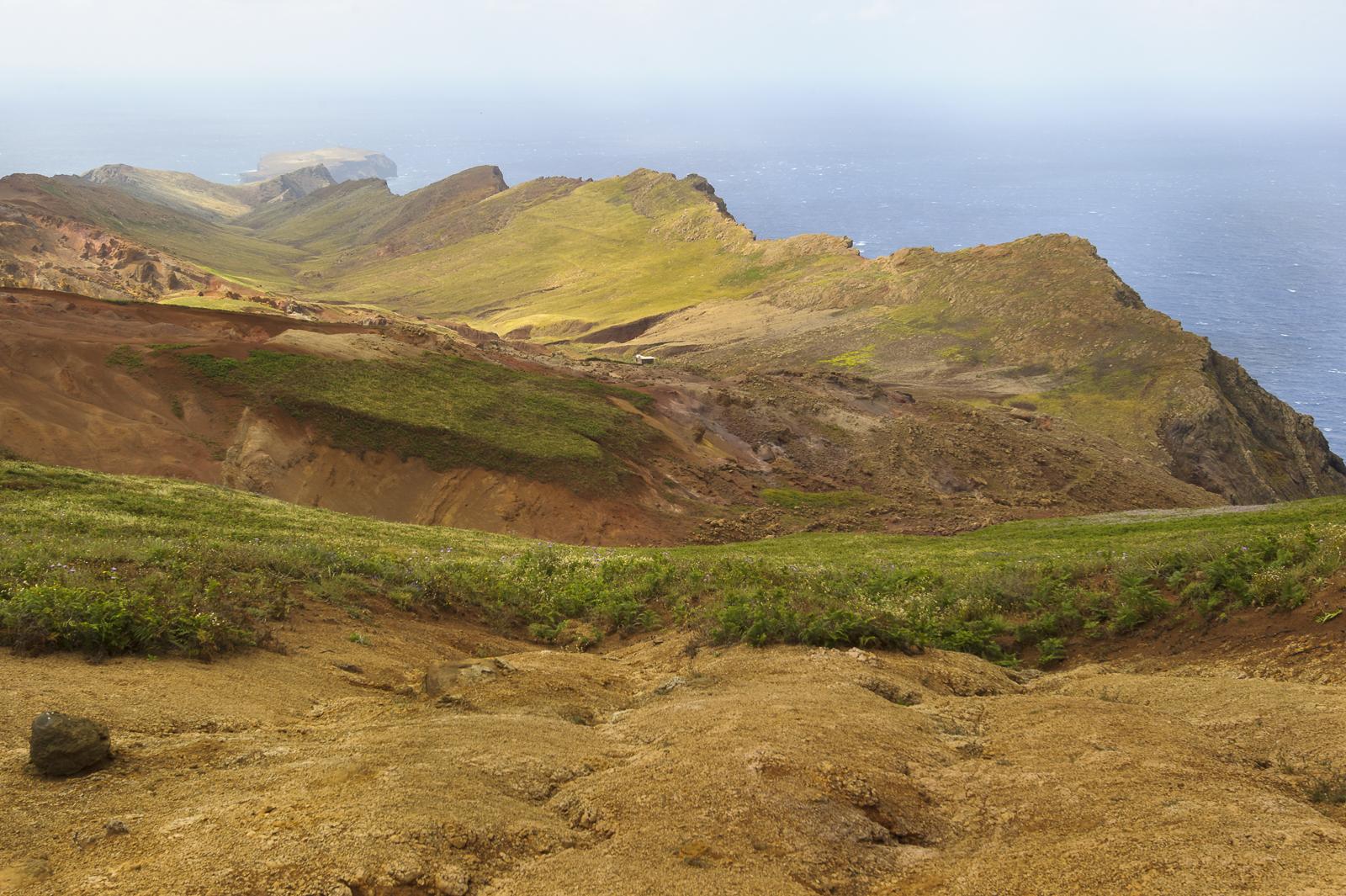 Castanheira valley seen from above, the greenish clearer parts are those already covered by Phalaris aquatica, Deserta Grande (Madeira, Portugal). This is the only place on Earth where Hogna ingens lives and thrives. 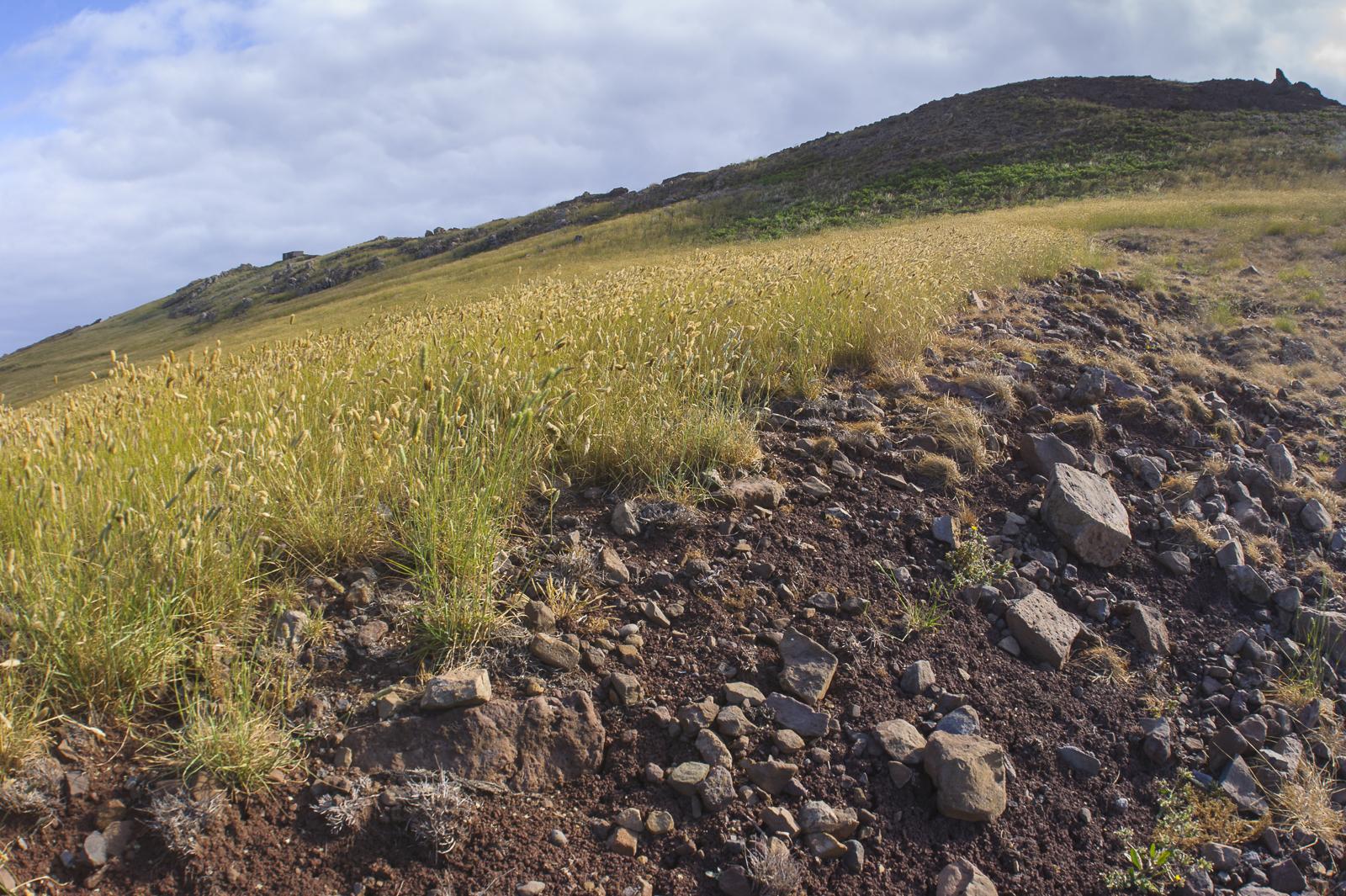 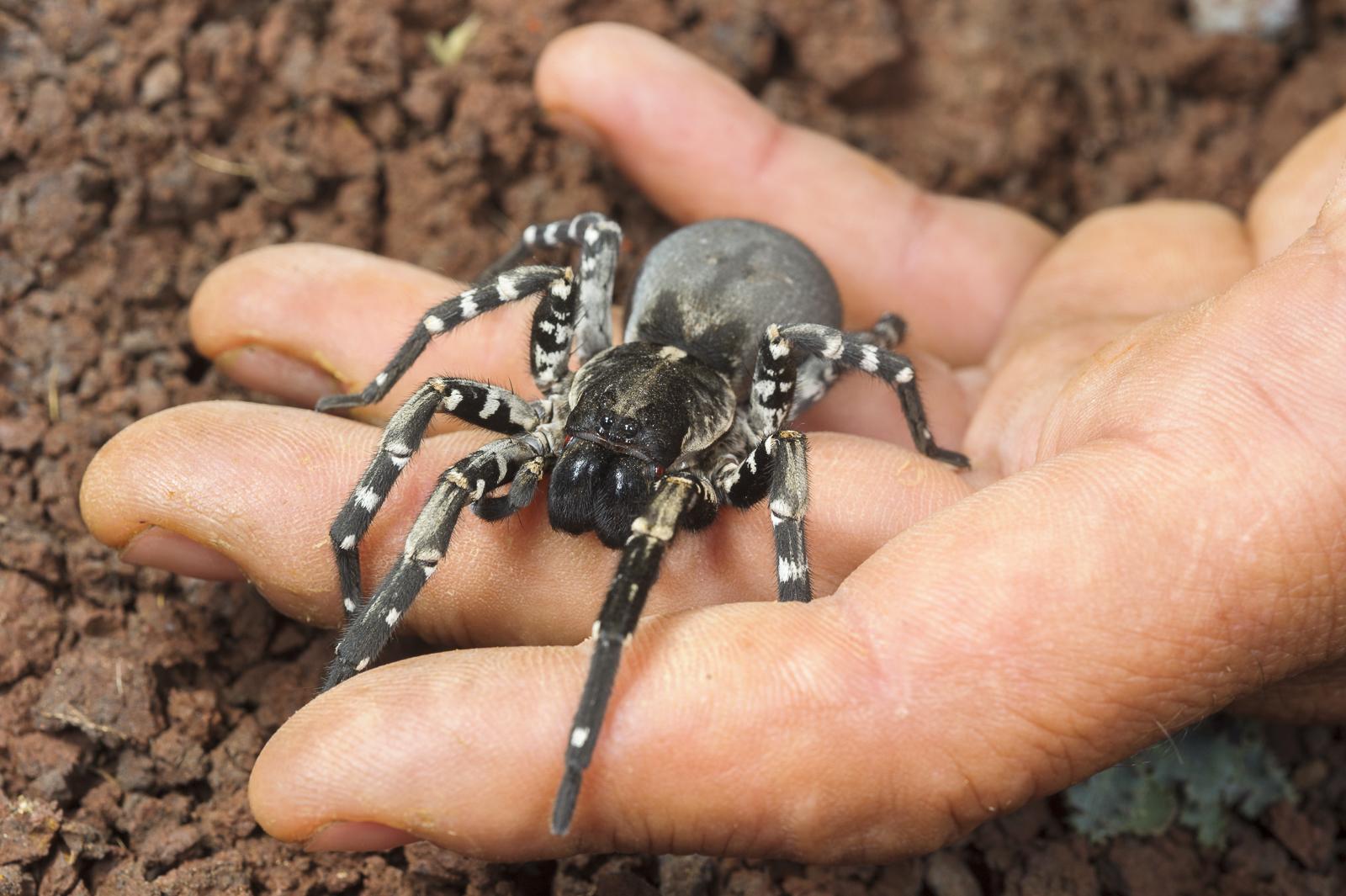 Deserta's wolf spider (Hogna ingens) adult female held by Isamberto Silva, Deserta Grande Island (Madeira, Portugal). He's a park's warden but he's also one of the most passionate defenders of this spider and he actively participated on the various sessions which took place to make a conservation assessment for this species. 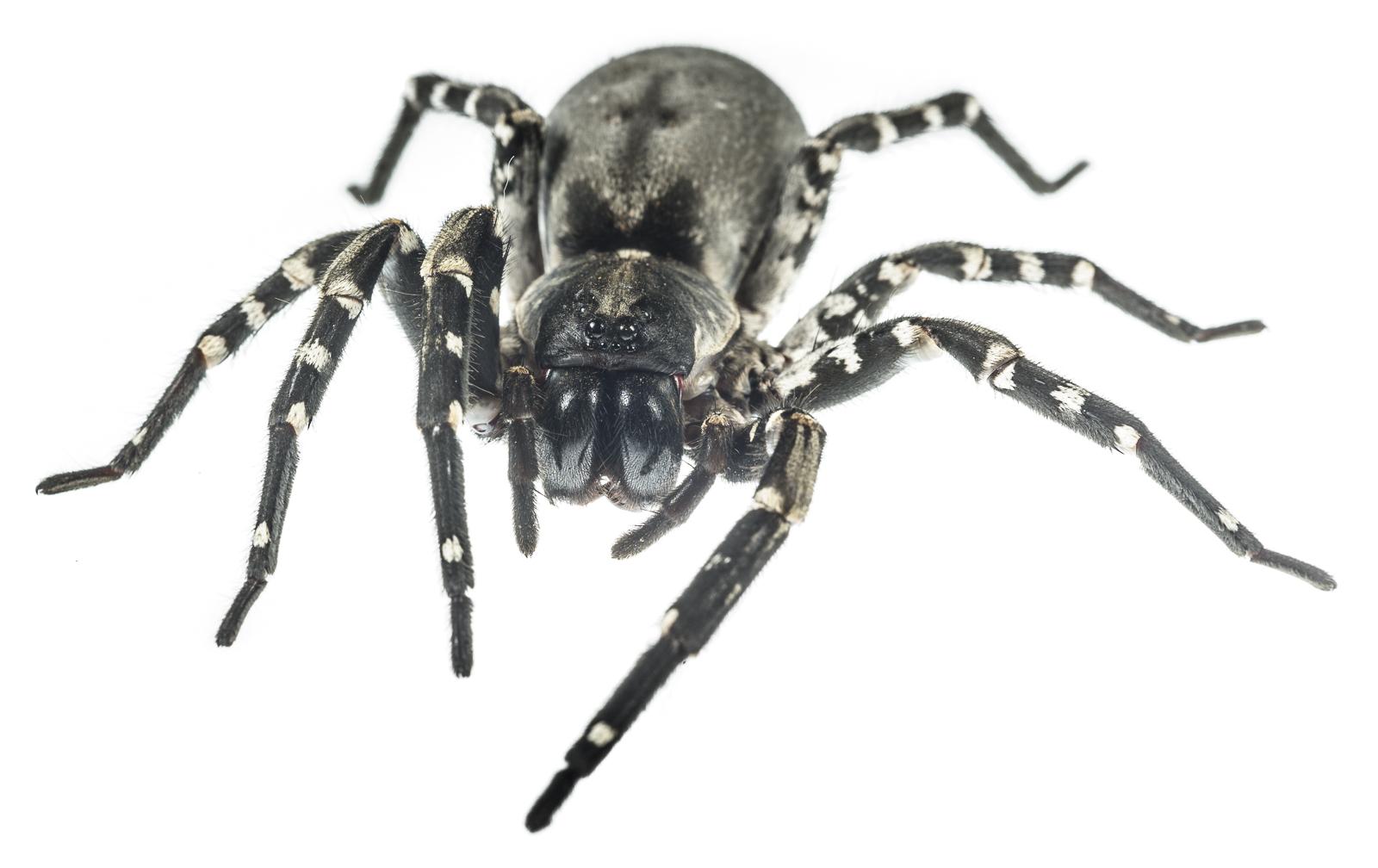 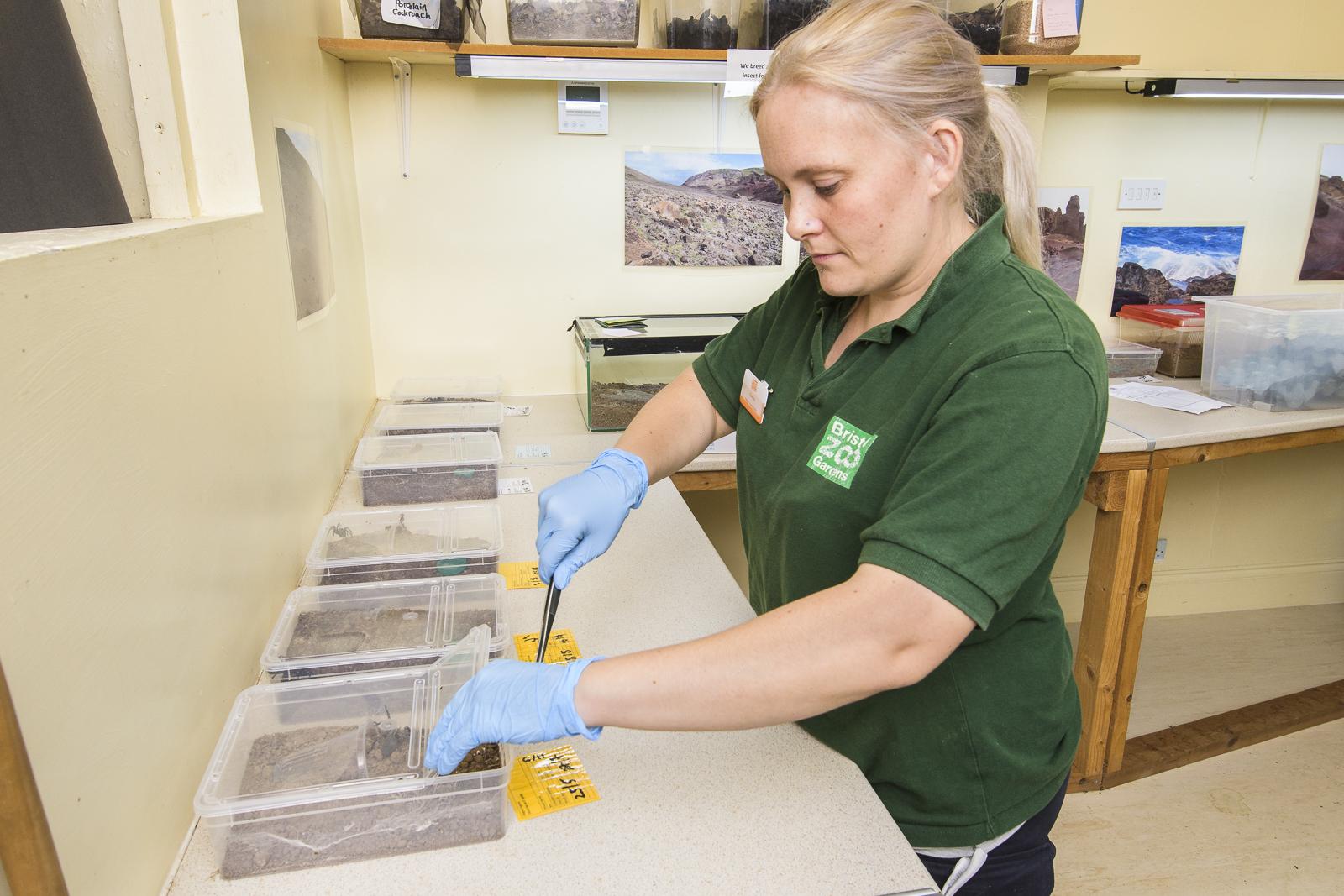 POST
The Panda of spiders: Hogna ingens, a conservation story

A 'critically endangered' spider, from a remote island, that only lives inside a small valley of this island. And it's the biggest wolf spider species known.

That was all I needed to know to be no less than truly excited for the next expedition. It was something I deeply dreamt since lot of years: observing and photographing one of the most endangered Arthropods in the world, and also one of the biggest ones among wolf spiders: the Deserta Grande wolf spider (Hogna ingens).

This species only thrives in a single valley on a single tiny island in the Madeira archipelago, called Deserta Grande (Portugal). A volcanic mass of rocks, a few square km wide embraced by the fiery waves of the Atlantic ocean, were monk seals and sea birds fish and live undisturbed.

I only had permission for two half days and one night in the remote Castanheira valley, where the spiders live by hunting their smaller relatives, migratory grasshoppers coming from Africa and even young specimens of the lizards Teira dugesii.

Once on the island, an amazing landscape began to run under my eyes, a Mars-like place where only the endemic and strong vegetation tells you that you're still on Earth. The hike was about 7-8 km long, very hard because of my equipment (in these cases, it's hard to decide to leave something home, but I've had to be selective anyway). The park's guide and field companion Isamberto Silva (a very talented naturalist) often laughed by watching my astonished face when reaching new sight points.

Finally we reached the Valley, visible in all its splendor and it was like being into some sort of shi-fi movie with dinosaurs'¦ Soon after we descended I felt that place as something different. Turning the stones fixed this feeling into my mind forever. Isamberto was the first one to find an individual, of course. Now that I know him, I wouldn't be surprised if he knew each spider's burrow in the valley! And what a spider'¦ Then came the first female, and 'wow' wasn't enough, so i just shut up in wonder: she was even bigger and stouter than the male, with a giant abdomen and a beautiful contrasted coloration. A 12 cm leg-span of spider staring at me with big dark eyes.

Hogna ingens population is suffering, and it's very strange for an Arthropod. Such confined territory is taking its toll, because of the human intervention in the past is causing a really worrying habitat loss. At first rabbits and goats were introduced, and they have started to eat all the local and often endemic vegetation of the island. Then this fragile ecosystem has been menaced by a new introduced herb (probably for rabbit and goats consumption), called Phalaris aquatica. This herb is the spiders' killer. It's growing all along the Castanheira Valley, taking ground over the natural landscape, thus preventing the spiders to take shelter under rocks and cracks. Where P. aquatica is present, no spider can be found.

One of the less abundant Arthropods in the world, living in one of the most striking yet fragile ecosystems, it's something that couldn't probably last forever, but this herb is speeding the things up.

Why we should care about such remote species? First of all, because each living species is something deeply rooted in its ecosystem, and we're too. We should never underestimate the role of even remote species, cause in the future they could turn useful to us to in some way. There's also another, maybe less understood reason: these are nature's treasures, they belong to the Portuguese and World heritage like the most impressive landscapes and art pieces do. It has been our fault if this spider is now in decline, and so it's our duty to do all that's possible to keep this marvel out of extinction.

Since a few years a conservation program is being carried on by various entities (Madeira Nature Park, Portuguese arachnologists and Bristol Zoo Gardens). Some spiders have been taken to ex-situ facilities and they're presently kept and bred to increase spiderlings' survival. The new generations will then be released back to the valley where the invasive herbs are being slowly but increasingly removed.

Bristol Zoo Gardens were finally able to breed the species and they'll soon release them back to a cleared part of the valley they come from!

I hope this story will inspire people to care about the less known animals, unique jewels of biodiversity as much as the bigger charismatic ones are and with the same important role in their ecosystems. 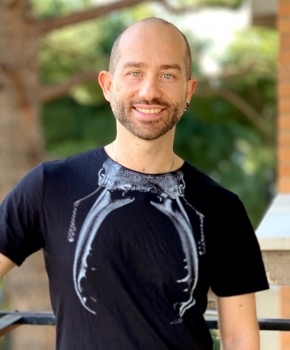