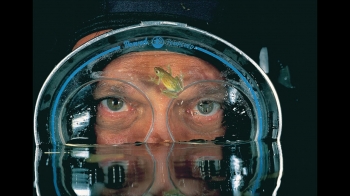 Senior Fellow @ iLCP, National Geographic
David Doubilet has spent a lifetime photographing the fragile underwater world since he first put his Brownie Hawkeye camera in a rubber anesthesiologists bag at the age of twelve. His personal and professional challenge to himself is... read on

David Doubilet has spent a lifetime photographing the fragile underwater world since he first put his Brownie Hawkeye camera in a rubber anesthesiologists bag at the age of twelve. His personal and professional challenge to himself is to capture the essence of our planet's oceans from the smallest plankton to the largest predator and make pictures that create an enduring connection between the reader and the sea. David believes in the power of the picture to motivate stewardship and responsibility through beauty and art, curiosity and active concern for conservation. His body of work is a collection of black and white and color imagery that may focus on the elegant design of a single creature such as the weedy sea dragon, the complexity of a kelp forest community or the threats facing a quickly vanishing species such as the freshwater eel.

David is a contributing photographer and author for the National Geographic Magazine where he has photographed over 65 stories since his first assignment in 1971. His primary focus has been on tropical, temperate and freshwater environments. His body of work on coral reefs is a continuing photographic legacy of the once vibrant, abundant and most biodiverse marine systems on our planet that are now shadows of their former selves due to over fishing, habitat destruction and global climate change.

David is also a feature columnist, contributing editor and author of twelve books about the sea. David is honored to be the recipient of the many prestigious awards, including: The Academy of Achievement Golden Plate Award, The Lennart Nilsson Award in Photography, The Explorers Club Lowell Thomas Award, The Blue Ocean award, The DEMA Reaching Out award, The Sara Prize, and the Boston Sea Rover and Beneath the Sea Diver of the Year awards. David was named a Contributing Photographer-in-Residence at the National Geographic and is a member of both the Royal Photographic Society, International Diving Hall of Fame and a founding member of the International League of Conservation Photographers.

David lives in the Thousand Island Region of the St Lawrence River on the New York - Canadian border and in South Africa with his wife and photojournalist partner Jennifer Hayes.