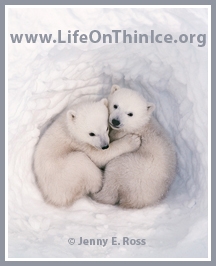 Jenny E. Ross is an award-winning photographer focusing on wildlife natural history and conservation, ecosystems, environmental issues, scientific research, and related cultural and policy topics. She's also a multidisciplinary scientist and writer. In her photography and writing Jenny strives to capture the essence of wild animals and wild places, raise awareness of environmental issues, explain scientific research to non-scientists, inspire concern and action for wildlife conservation and ecosystem protection, and elicit a renewed appreciation of the natural world. Her photographs, often accompanied by her essays, have been published widely throughout the world in books, magazines, scientific journals, and newspapers, and displayed to acclaim in many exhibitions.

Jenny has worked in ecosystems around the globe, including the Arctic and Antarctic, deserts in Mongolia and North America, the African savanna, and various forest ecosystems in Borneo, China, Nepal, North America, and South America. She often collaborates with scientists, and is highly respected for her ability to create compelling articles, exhibitions, and lecture-slideshow presentations that combine stunning photographs with engaging and scientifically accurate information. Jenny is particularly known for her expertise regarding the Arctic, climate change, the natural history and conservation of polar bears and the world's seven other bear species, and the diverse ecological, environmental, and water-use issues affecting the Salton Sea and Colorado River.

Jenny frequently works with top researchers in a wide variety of disciplines ranging from biology and ecology to geology, paleoclimatology, and cryosphere science. Her ongoing long-term project Life On Thin Ice® focuses comprehensively on climate change issues throughout the circumpolar Arctic, the growing impacts of rising temperatures on wildlife, ecosystems, earth systems, and people in the Far North, and the global ramifications of the arctic transformation that is unfolding. She developed this project to help advance public understanding of arctic science, policy, and conservation issues by providing photographic and journalistic support for scientific research and public education initiatives. Jenny's other ongoing long-term project focuses on issues related to the past, present, and future of the endangered Salton Sea and its lifeblood, the Colorado River. Jenny was educated at Stanford University and Harvard Law School, and her academic background included biology, environmental studies, philosophy of science, art, law, and public policy. Most recently her scientific research has concentrated on geological, paleontological, and paleoclimate investigations.

Jenny's photographic honors include First Prize in the World Press Photo Awards (Nature, Single Images), as well as the Nature's Best Award for Wildlife Photography, the Philip Hyde Award for Environmental Photography, the Vision Award of the North American Nature Photography Association, and a top awards in Pictures of the Year International and Wildlife Photographer of the Year. Previously a practicing attorney, Jenny ultimately chose to leave the law and focus instead on photography, writing, conservation, and scientific research.