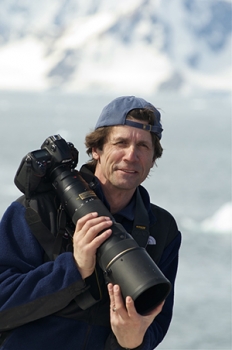 Member
James Balogs distinctive images reflect his passionate quest to understand the complex relationship between humans and the environment. His book SURVIVORS: A NEW VISION OF ENDANGERED WILDLIFE was considered a major conceptual... read on

James Balogs distinctive images reflect his passionate quest to understand the complex relationship between humans and the environment. His book SURVIVORS: A NEW VISION OF ENDANGERED WILDLIFE was considered a major conceptual breakthrough in nature photography. For it, he received the Leica Medal of Excellence in 1990. His photographs have been exhibited in prominent arts institutions from Paris and Greece to New York and Los Angeles. They are in dozens of public and private collections, including those of the Corcoran Gallery, the International Center of Photography (New York), the Centre Nationale de la Photographie (Paris), the Muse de l'Elyse (Switzerland), and the Gilman Paper Company. In 1996, he was the first photographer ever commissioned to create a sheet of stamps for the U.S. Postal Service. He was twice the recipient of top honors from World Press Photo and has received the highest award in Graphis magazine's photography competition. Balog was among a select group of internationally renowned photographers chosen to work onA DAY IN THE LIFE OF AMERICA andA DAY IN THE LIFE OF THE SOVIET UNION. He is the author ofANIMAL, ANIMA,SURVIVORS: A NEW VISION OF ENDANGERED WILDLIFE, WILDLIFE REQUIEM, and the children's book,JAMES BALOG'S A TO Z.

James's latest project, the Extreme Ice Survey is an exciting and unique portrait of what is happening to glaciers around the world. In its first phase, the Extreme Ice Survey team installed 29 automated time-lapse cameras at glaciers in Greenland, Iceland, Alaska, the Rockies and the Alps, capturing visual evidence of glacial melt due to global warming. The culmination of the project was the Oscar-nominated "Chasing Ice," a film which has redefined the global conversation on climate change at all levels of society. James has now turned his cameras to the Antarctic, and continues to document the reality of our changing climate.