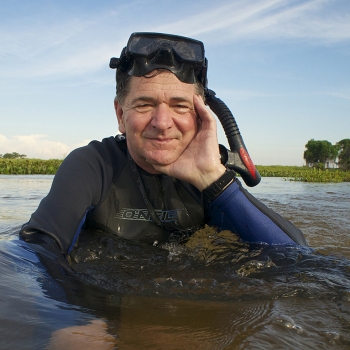 I'm a freelance photographer, based in Fribourg, Switzerland and specialized in photography of freshwater ecosystems across the globe.

Detailed biography : Michel Roggo was born in Fribourg, Switzerland in 1951. He has worked as a professional photographer since 1987. He is member of the iLCP International League of Conservation Photographers.

Michel started taking pictures at the age of thirty. Trips abroad quickly followed, including to Alaska, where he observed migrating salmon for the first time. Fascinated by these images, he decided to document them under water, but without diving, so that he could work independently outside in the bush. He returned to the salmon rivers year after year to refine his technique.

Using the technique he developed for salmon, Michel began photographing other freshwater subjects, focussing more and more on freshwater landscapes, and revealing these unique habitats for perhaps the first time. He has since become an award-winning leader in his field. "We know what coral reefs look like", Michel says, "but what about the creeks, streams, lakes and ponds on our doorstep? I'm always looking for new and interesting scenes with the most dramatic light - a marsh pond, under the ice in a mountain stream, among algae"¦ these habitats are hardly ever seen but they are incredibly beautiful."

Michel Roggo still uses remote control systems under water, but at the age of sixty he began shooting pictures while snorkeling. Two years later, he took up diving " in the Siberian Ozero Baykal, the largest and deepest lake in the world.

In 2010, with the experience of more than a hundred expeditions behind him, Michel Roggo launched an ambitious project dedicated to freshwater: The Freshwater Project. In seven years he photographed forty different and spectacular freshwater environments from across the globe.

Michel Roggo is internationally recognized as a specialist in freshwater photography. He has exhibited his work in more than forty solo exhibitions, and has been a prize winner in competitions such as the Wildlife Photographer of the Year and European Wildlife Photographer of the Year. More than 20'000 of his pictures have been published by GEO, BBC Wildlife, NATIONAL GEOGRAPHIC online, mare, ArtMalaysia Magazine, WWF International, Sierra Magazine and more. He was a photographer for Wild Wonders of Europe.