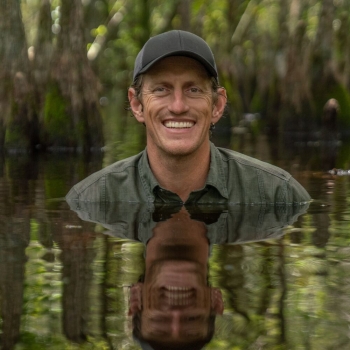 Senior Fellow
Carlton Ward Jr. is a conservation photographer focused on wild Florida. He founded the Florida Wildlife Corridor project in 2010 and has since trekked 2,000 miles during two National Geographic supported expeditions to advocate for the... read on

Carlton Ward Jr. is a conservation photographer focused on wild Florida. He founded the Florida Wildlife Corridor project in 2010 and has since trekked 2,000 miles during two National Geographic supported expeditions to advocate for the corridors protection. The most recent Florida Wildlife Corridor Expedition is the subject of the new film, The Forgotten Coast, featured at the Environmental Film Festival in the Nations Capital and set to play nationally on PBS in 2016.

"Every hour, Florida loses 20 acres of wildlife habitat to development. We need to invest in conservation at a similar pace to balance a future for wildlife and people. If we do what is needed to save migration corridors for black bears and panthers we can still save wild Florida.

An eighth-generation Floridian, Ward has developed strong connections with conservation organizations, researchers and landowners. His family owns a ranch in the Peace River Valley that provides habitat for Florida panthers and he has several cousins who are full-time cowboys in the Greater Everglades. He is now working as an ambassador for the recovery of the Florida panther, a plan that calls for conservation of hundreds of thousands of acres of ranchlands and forests and across Florida.

Ward is a founding fellow of the International League of Conservation Photographers (iLCP). He earned a Masters degree in Ecology and wrote Conservation Photography, the first thesis on the emerging field. For his first book, The Edge of Africa, Ward worked for the Smithsonian Institution documenting little known biological diversity in the tropical rain forests of Gabon. Resulting photographs were exhibited at a United Nations reception in New York. His 2009 Book, Florida Cowboys, won a medal in the Florida Book Awards and for that work Popular Photography Magazine featured him for working to save vanishing America. In 2015, Ward was given the Conservation Leadership Award from the Fish & Wildlife Foundation of Florida and named the Rolex Artist-in-Residence with the Explorers Club.

Wards photographs are exhibited widely and have been published in magazines including Audubon, Smithsonian, Geo, Africa Geographic, Nature Conservancy and National Geographic.